I have been on a Cleveland vinyl record binge of sorts for the better part of 2015; often I can be found face in iPhone, scouring Ebay and Discogs for classic slabs of vinyl from northeast Ohio bands typing in keywords like Dreyfus and the Floyd Band that have probably never been searched for in the history of the site. I feel like hugging the mail lady every time she drops a thin square box onto my porch...I don't though.

The record that started my downward spiral into internet vinyl purchasing hell was the absolute Cle Classic, Cleveland Metal compilation. A brave but reckless gathering of the cream of a nasty crop of bands from a town that, at the time, was a wasteland of poverty and crime. Of course this is what makes metal what it is and this record is full of METAL...better or worse. 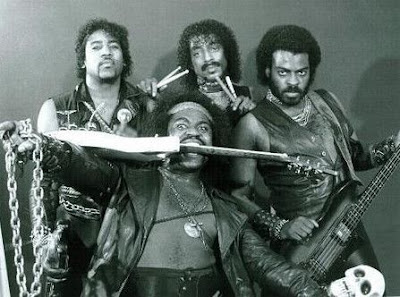 Opening with a maniacal laugh, Black Death are the single best choice to start this comp. "Taken by Force" is charging; a force to be reckoned with, bashing in your head with absolute metal power. How these guys never "made it" in the eighties metal world is beyond me; they sound as contemporary and looked as brutal, in their denim and chains, as just about any band in the mainstream at the time. They deliver bad ass street metal on "Until We Rock": a Cleveland love song if there ever was one. Sounding like Kiss if they grew up in Parma, they wail "I need your loving, you need my loving too".

Sacred Few bring what they call "rock and roll salvation" but it's really a randy AC/DC impersonation. It makes more than perfect sense that a Black Label swilling bar rock band would be in the mix on a comp like this from early eighties Cleveland: as progressive as we want to make ourselves out to be the music scene has always been about cold beers and battle scars which these guys HAVE to be full of. It's a drunken blur of a song straight out of any bar on Lorain Road...hey man, they say it best "you'll be rocking with the Sacred Few".

It's really the sparse recording of Mistreater that is the center of the record. Trashy, wicked and dangerous; they sound REAL like something I would have bought after hearing it played on WJCU. Their rare EP can fetch triple digits on EBay but this one song is enough to get the point that these guys lived by their name. 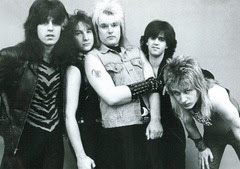 Not surprisingly its Cleveland legends Breaker that are the run away highlight with two well produced tracks of progressive metal that seems light years ahead of its time in comparison with its cohorts on Cleveland Metal. "10 Seconds In" is hulking in it's nerdy story telling charm while "Walking the Wire" showed a song writing prowess that eventually helped them break internationally much like Shok Paris who are a raging, rocking octopus of metal charm on their sped up track "Go Down Fighting" making Dokken look like pussies in the nighttime alley metal genre.

Last thought here is why has no current Cle metal band covered the first two minutes of Sorcerer's thrashy "Bloodline"? It's the perfect tear the room up ripper to shell out at Now That's Class gigs but only the first two minutes, the following 4 minutes are a hung over attempt at doom art riffing that is classic Cleveland fumbling.

A true gem and time capsule if there ever was one for the early Cleveland metal scene. I am really thankful to have been able to find some of the stuff I have gotten my hands on recently. Cleveland has such a rich history in rock, heavy music and pure underground nonsense and it's an absolute pleasure diving into it all.