I finally placed my two feet back onto that blessed Ohio ground after a year and a half estranged. It felt like I was walking on air - I was beyond happy to be back where my roots are so solidly planted. When I got the text that Clevelands steam rolling, hardcore vets Fuck You Pay Me were playing at the Foundry I was pumped, excited at the thought of reliving some memories in a building I have been blacking out inside of since my early twenties.

From when I first talked my way past a huge cover charge ("listen we are going to spend double that cover on drinks in an hour") at the Blind Lemon (I think Total Chaos was playing) to drunkenly ringing in the New Year at the HiFi while Stevie Rachelle of Tuff murdered cover songs in an ugly display of the eighties rock bottom falling out - I have loved that place as much as I can remember of it. Now the Foundry, its third name in my patronage history, the club looks exactly the same with only some flat screen televisions to spruce up an otherwise rock and roll hole in the wall.

Let's forget all about the weird, ugliness of headliners the Meatmen and just move on to what matters here: Cleveland. Wetbrain played soon after I arrived; sun still in the air, stumbly singer clad in shorts looking like he just left a bbq in Ohio City. The bombastic, no fucks given punk found on their LP (reviewed HERE ) was lost in the hollow sounding room leaving the songs seeming sober or maybe just day drunk and somber. The band ripped through the set, chugging through as the small crowd did the same to so many cans of cheap beer, leaving me wanting a second shot in a seedier, more dangerous setting as the music demands.

Gluttons brought the inebriated crash course they have been delivering for over a decade with no apology. Their cover of Cheap Tricks "Hello There" was a highlight: full of piss and gasoline, they turned the anthem over and exposed the pure dumbness of rock and roll fun...in a good way. 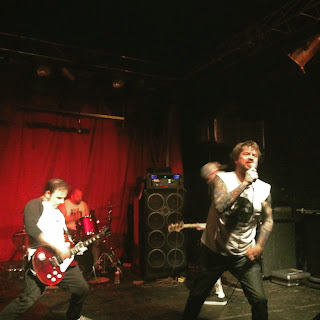 FYPM took the stage with the usual Cleveland one two punch of shit talking followed by a face smashing ripper from the get-go. Tony Erba laid the Parma charm on thick, insulting the crowds drinking habits and calling out old girlfriends. Anchored by Aaron Dowells razor blade guitar licks, FYPM is a bouncing, weaving, ship out of control. They are Cleveland hardcore meets Kentucky Fried Movie; loud and crude carnival barkers trying to sell you on the newest buckeye state conspiracy theory.

It may not have been a night at the Cleveland Orchestra but the music heard was as much a staple lodged into the skin of the city. It's nonsensical bar rock but it has been as much a part of growing up in the Cleveland area as Big Chuck or Cotton Club; a dark monster lurking in the most unappealing dive bars along the Cuyahoga river since as long as I can remember. Good clean Cleveland fun.

Posted by Dead Town Cleveland at 11:15 AM