One Song in Words - HIRAM-MAXIM Visceral 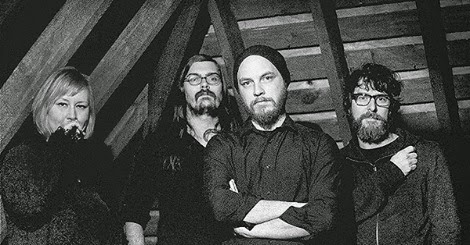 The Lottery League was always a great way to hear some abstract music from people who usually stick to what they know. Much like the Battle Bowl in World Championship Wrestling, it randomly drew names of local musicians from a hat to create bands made up of sometimes total strangers forced to write brand new music together ASAP. This Marvel comics “What If” philosophy is how local ambient stoner metallers Hiram-Maxim came to be – in pure truth is stranger than fiction fashion, they are set to release their first full length record on Aqualamb records.

Thanks to the fine people at Vice, the world got a sneak peak with the early release of the song Visceral: a seven minute opus of raw emotion and down trodden riffs – a journey through a dark dimension of musical experimentation (aka Cleveland weirdness at it’s most artistic). Fred Gunn provides the eerie vocals – a far removal from his days fronting the snotty punk rock antagonizers Sex Crimes. Here he shows another side of his personality: a somber, dare we say more adult, Gunn has a voice full of sorrow on Visceral, a song he says he wrote in remembrance of a deceased friend.

The first two minutes creeps with the vampy persistence of Type O Negative; a gothy mystery that tugs us along until exploding into a doom metal ode to Midwest hardcore, like Windhand covering Endpoint. Pedal fuzz drains the song into horror movie score territory, blissfully spinning into a heavy-eyed end, leaving goose bumps on arms and sleep at bay. If the full length stands up against Visceral then we are in for a long night of exceptional music that’s in a league of its own.

Posted by Dead Town Cleveland at 10:52 AM