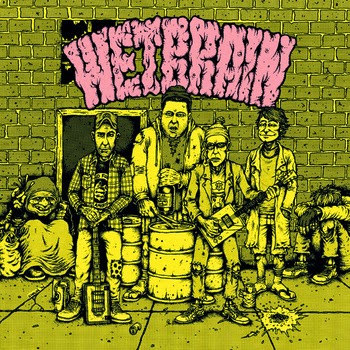 Hands are shaky, nose running, head spinning; Cleveland morning syndrome brought on by “the lifestyle” which leads some to early party-remorse-retirement and others to musical shittery of the most excellent variety. Wetbrain is made up of hard luck lifers of the west side variety (you know, the kind that saw Motorhead at the Variety) and their stuff sounds the part even as much as they look it, scabbed knuckles, callused fingers et al.

If you live in Cleveland and have been living under the rock that is the local music scene, then you don’t need to be told the lineage of dumpster dive orchestras that these guys created in their past but let’s just say that with out their histories the music scene would have been more Modest Mouse influence than Gauze. Nine Shocks Terror, GSMF, The Darvocets…the list reads like a documentary on Speak in Tongues.

Wetbrain isn’t a “where they left off” type of band though; instead they are the type of booze and bruise rock and roll only made by assholes that never stopped. It’s West Blvd rock, Unique Thrift punk: just don’t call it rehash because this is a full on pipe bomb of rust belt aggression. The musical chronicle of being down and out in a town that’s just the same.

“Occupy This” stumbles like last call at Now That’s Class; crass and unapologetic street rock played by guys who know it well. The spastic rush of “This Never Happened” rattles your brains with the rapid fire call ‘shut your mouth, can’t win’ being a little too close for Cleveland comfort.

The blood curdling hardcore of “Party ‘Till It’s a Blurr” is a strange and near perfect companion to the borderline smart rock and roll of “Euthanize Me”. It ends as blurry as it began; “Mental Surgery” showing as much Cleveland panache as a Browns Starter jacket.

Also to be noted is the sad in a way self-portrait cover art by Shaun and the classy color vinyl. It may have taken awhile but the first Wetbrain long player is worth every hangover you had last year.
Posted by Dead Town Cleveland at 2:51 PM